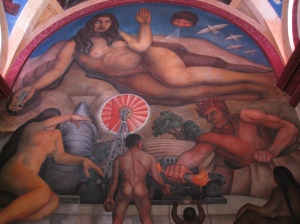 Why Creative People Are Eccentric, the article is called,  http://www.scientificamerican.com/article.cfm?id=the-unleashed-mind and it closes with “well, let’s treat the freaks nice–if they’re productive–because they make things for our society.” Tzvetan Todorov says that sciencism, as a belief system, is more frightening than racism, because no one brags about being racist-ly minded and yet science often is used to construct elaborate and seemingly inarguable sets of data to maintain and reinforce oppressive frameworks. These days, of course, science operates less overtly. No one publishes papers on phrenology in the Scientific American anymore (thank god). But, the article above, is an example of the banal reinforcements that science, especially branches of science like neurology, psychology, genetics, and social sciences like anthropology (see Trinh T. Minh-ha for more on the latter), provide for modes of thinking that present a normal-ized Us against a diagnosable Them.

In the SA story, the author, Shelley Carson, points out that creative people often have eccentric thinking, fanciful beliefs, unusual perceptual experiences…believing their work is transmitted to them by other entities, dressing or behaving counter to cultural norms, etc. I don’t feel like analyzing the article, really, so i’m not working that hard here. But reading this, it’s not difficult to trace the line from here backwards to the more straightforward Western-Christian debunking of “heathen” beliefs, prominent during the hundreds of years of old-style colonial invasion (to be differentiated I suppose from current era colonial invasion, when god is mentioned less than “Freedom”, leading naturally to the question, “from what?”) based on the facts and proofs of the Christian bible.

Of course we agree that voices only come from human mouths and that art emerges from the cognitive debris of the material world. Of course we agree that any belief system that encompasses a direct relationship with the spiritual is eccentric, strange, “schizotypal”. I mean, if you really believe it that is. If you understand your beliefs as metaphors, as we term them metaphors, well then…that’s all right. or if not, never fear, you can produce the idea, you can sweep up information from the dusty floor of your subconscious, reconstitute it in a sensible order and package it for us a painting or manuscript or video or song—these mediums which we have deemed acceptable for your eccentricity, which by producing you may earn the status of artist (the insider Other) rather than crazy or criminal—and we will understand them for you, terming them as metaphor, revealing what you Really Mean. (see The Sasquatch Poems by Sherman Alexie for more on why to “fear metaphor”.)

I realize I am mixing my own metaphors/meanings here. I am touching crazy, queer, indigenous, non-white, non-christian all at once and indirectly. I am not trying that hard to be coherent either. But I think of what this means personally—that to survive I had to learn to trust my dreams/fantasies/sense-of-more-layers-of-reality-than-the-immediately-tangible against the rigidity of the scientific thinking in which i was raised. I think about how this same kind of thinking undermines the authority of peoples whose cultures converse with spirits as a rule, rather than the “abnormal” exception, who are forced to adapt to the language of science if they want to fight for their right to maintain those cultural practices. I think about how this kind of science implies, when it says normal, that normal is a category closely (if not exclusively) aligned with traits of white culture within a certain socioeconomic class……

And how hard it is to not analyze—to use that part of my brain privileged by sciencism—in response. when it is the hour for working on a story. shoot. (did science win again?)

Dogs seem to handling the lack of a morning walk okay
I think somebody loves me a lot @cauhboi
I call it "Abjection"
Look who's not in a hospital gown
Happy nine years to the kind of person who, after a week of making sure I'm warm, fed, in a comfortable position, not dying of a sudden, middle of the night skin sensation, not falling over, receiving adequate medical care, entertained, kept company, taking my meds on time, after driving me all over Alberta, voluntarily hanging out in one of the most depressing hospital wards ever, filling my prescriptions, talking me down from my anxieties, building a pulley system for me to get myself in and out of bed, spending hours lying next to me talking about things great and small, and deferring many of his own needs and desires because he wants me to feel as okay as possible, who after all that found the time and love and energy to make our anniversary important. I don't know if that's a "kind of person", or just this one singular person, who I've been lucky enough to spend almost a decade giggling with and who keeps insisting, despite my resistance, that love is magic, and who has all this time been proving it.
Ready...
%d bloggers like this: